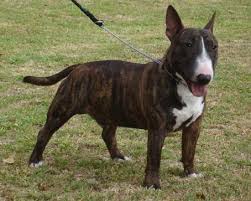 When Major entered his families household, he was “Shorter than the grass in the backyard”.  Fourteen years later, this conservative Staffordshire Bull Terrier is still with us.  Nothing fazes him.  According to his owners Major never acted like his breed, being distinctly different than any other Staffordshire Terrier they have ever owned.

When Major attended obedience school, he received a “respectable failing grade”.  Mr. B recalls saying “Sit” or “Come” and Major just stood there, looking around and not paying the slightest attention.  He confides that he thought he had the “Stupidest dog on the planet”.  Remember Forrest Gump? “Stupid is as Stupid does”.

Major stared in a movie called “Drop Dead Gorgeous” (an earlier version).  He was picked up each morning for four days in a doggy limousine and was away for eighteen hours each time with no interaction with his family.   The movie was not nominated for any awards, but Mr. B was there to see his buddy on screen.  “He looked fine”, Mr. B said, “but he just did his own thing, as if the director just gave up on commands and let Major act as he wished”.

Mr. B fondly remembers a family kayak trip that Major joined them on.  Things went well until the kayak was about to leave the murky area of the lake.  Major realized where he was.  The next minute, he over turned the kayak and everyone ended up in the murky water.  Mr. B says the last thing he saw was Major frantically trying to paddle the air.

Major is still pretty much the same when he comes in to the hospital.  We lead him to the exam room and try to get him to go on to the scale.  As you may guess, most of our wishes are carried out by lifting him to the activity which is required.