Did I do That? 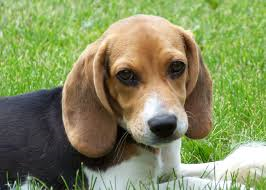 If you take Newman, a two year old Beagle, on appearance alone, he seems like an angel of a dog. Imagine his soulful eyes and his sweet little face. Can he be guilty of any bad behaviour? Read on.

In May of this year, Newman was brought to the hospital after he rummaged through his pet supplies cupboard. He devoured the following: ½ bottle of a tonic to control hair shedding, all his heartworm medication, 1 package each of rawhide bones and breath fresheners and a half of a plastic feeding bowl.

Well, Newman had himself a grand old time that night. His owner had hysterics.

Just what kind of dog is Newman , you ask? He expects to be literally tucked into bed with his favourite quilt each night and cries until it is done. Newman’s magic words are Tim Horton’s and Timbits. Whenever those two words are mentioned, he flies into frenzy. He is quite an actor too. Recently, he got one of his nails caught on a mattress. It was badly torn. Newman jumped and played with his owner, without a care in the world. Actually, he walked quite normally into the clinics, but as soon as he saw the vet he began to limp. Once out of the exam room, he was fine, but amazingly, each time he saw a new client come in, his limp reappeared.

Angel or imp? You decide.